What is Match Racing?

Match racing consists of two boats racing against each other, in a one-on-one duel of strategy and tactics with the simple objective of being the first to cross the finish line. The most renowned match racing event is the America's Cup.

THE BASICS OF MATCH RACING 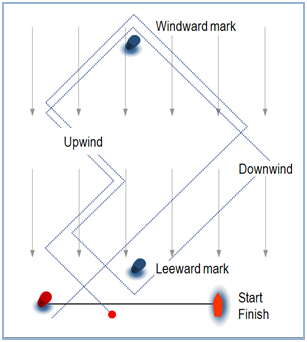 THE MATCH
Each match consists of a race between 2 boats.  A specific number of matches between different pairs of boats is called a flight.

After rounding buoy 2, they return again against the wind back to buoy 1 and then straight to the finishing line (finishing line = starting line).

Two rounds of this course in medium winds takes about 15 – 20 minutes to complete.

At this point, until the starting signal, the first part of a duel begins. As soon as the boats enter the starting area they will engage in a pre-start battle as each one tries to gain an advantage over the other. They will both be trying to cause the other boat to infringe a rule and so receive a penalty or to simply get the most advantageous position on the starting line for themselves so they are in control of the race. One trick, using sailing's "right of way "rules, is to force the opponent into an early start, meaning the boat has to return back behind the starting line.

THE RULES
There are two basic "right of way" rules in match races; 1) the boat with wind from the right (starboard) has right of way, the opposing boat has to keep clear, and 2) in a double length circle distance from turning buoy, the boat on the inside has right of way and can turn first.  The duels usually happen in the narrowest space. Wins and losses are often decided by only a boat length.

Match racing is officiated by umpires on the water who follow the boats and make instant on-course decisions about whether a penalty is given.  A boat which receives a penalty has to do a penalty turn (270 degree turn). This penalty turn must, unless otherwise signaled, take place at the latest, before entering the finishing line.  If one boat has a penalty and the other boat also gets one before the first has taken their penalty turn, then they are cancelled out. If a boat receives three penalties then it is disqualified.

THE UMPIRES
Every match is watched and followed by two judges in small power boats who, depending on the incident, make decisions on protests and give penalties. When one of the two teams protests by raising a yellow/red striped flag, the judges will respond by raising one of the following

The course is set off the Veterans Memorial Pier locatedin the Belmont Shore section of Long Beach, California.  The Race Committee boat, “The Loynes” is located directly in front of the pier. To the left (port) of the Race Committee boat is a gold and black inflatable sphere. This will be both the start and finish line for the race. 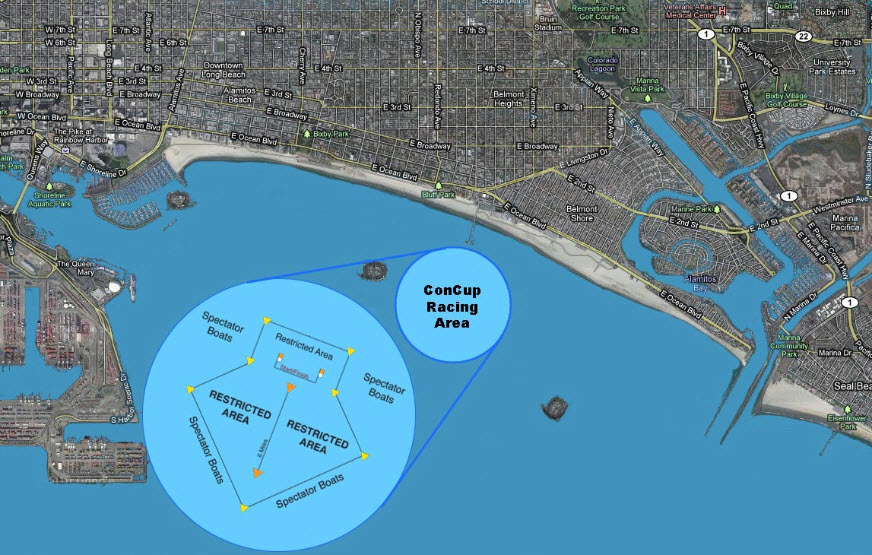