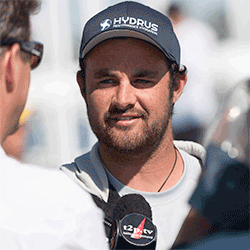 CHRIS STEELE, and 36 Below Racing, returns this year to shake things up in his fourth Congressional Cup appearance.

Chris is a talented young Kiwi skipper, a product of the powerhouse Royal New Zealand Yacht Squadron training program. He has been match racing in earnest since 2011.

A testament to his talent is that he achieved a personal best in the open ISAF rankings of 5th, and again finished the year as he did in 2016 with a 4th place overall at the WMRT World Champs in China.

Chris Steele was very grateful to receive an invitation to participate in his favorite event of the year: The Congressional Cup. The hospitality in long beach being like no other around the world, it's Chris’ home away from home.

“It truly is humbling to be a part of such an awesome week both on and off the water” says Steele.