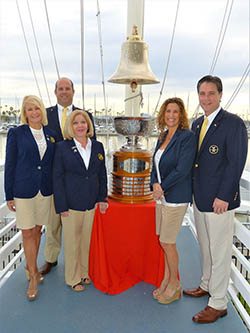 The “granddaddy” of match racing, Congressional Cup, was established in 1965 and pioneered the concept of on-the-water umpiring. This year, 2018, marks 30 years of dispensing instant on-the-water justice.

The reigning Congressional Cup champion, Great Britain’s Ian Williams, will be back to defend his 2017 title.

Full story in The Gazettes