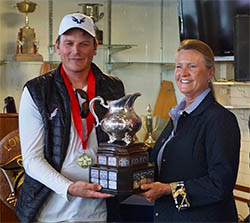 Also qualifying for Congressional Cup is Johnie Berntsson, SWE, who finished second in the three-day regatta, which was founded by Long Beach Yacht Club in 1980 to honor legendary yachtsman Bill Ficker.

Barker was nearly undefeated in Ficker Cup, logging an impressive 13-1 record in the Round Robins. His only loss was to Dave Hood, USA: a Staff Commodore at LBYC and winner of the recent California Dreamin’ stop, who used his local knowledge advantage to call a shift to the right side of the course.

But from that point on, Barker was unstoppable, dispatching Leonard Takahashi, JAP, in the semi-finals 3-0; and crushing Berntsson 3-0 in the finals.

“I’m not sure when we stopped match racing,” Barker said; speculating the 2005 Congressional Cup event, which he won, “could be one of the last match racing events I’ve done.” But he certainly hasn’t lost his touch, as evidenced by his steady, cool-headed performance on the waters of Long Beach.

Sunday delivered a chilly and shifty sea breeze beneath hazy skies. As a backdrop to the racing was the pervasive buzz of Long Beach Grand Prix racing, downtown.

After Barker defeated Berntsson in the final of the Round Robins; he swiftly dispatched Leonard Takahashi, JAP, in the semi-finals; while Berntsson eliminated Chris Poole, USA, 3-0. 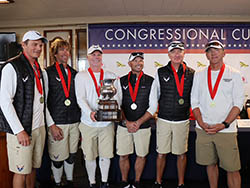 In the petit finals, Poole, a late addition to Ficker Cup, placed third, after a 2-1 finish over Takahashi, but admitted he had been mildly surprised to make it to the semis. “Honestly, when we came out here, and our practice day was cut short due to heavy winds, and one of our crew wasn’t here yet, I didn’t think we’d be here,” he said.

In a series fraught with fouls - including a black flag disqualification - he said, “Looking back, there’s a little more work to be done, to find that extra gear that Johnie seems to have found.”

Takahashi, finish fourth, said, “I’m still trying to figure out how we got into a position to get to race Dean Barker. It was truly a humbling experience, and I’m thankful to Dean for giving us a lesson.”

“He’s a great sailor; the whole team’s been looking up to him for years,” added Takahashi, who is just 19 years old. “I’m honored to be able to race against him, and all these guys here.”

Berntsson’s advancement marks his tenth entry into the Congressional Cup. Winner of the Crimson Blazer in 2009, he finished second last year.

At the prizegiving at LBYC, Deon Macdonald, daughter of the late Bill Ficker, was on hand to present the esteemed Ficker Cup to Barker.

“It’s an honor to win the trophy named after Bill Ficker,” Barker remarked. “It’s been a fantastic week, it feels a little like coming home to Long Beach.” Barker has competed in three prior Congressional Cup regattas, winning the trophy in 2000 and 2005.

“This has been a fantastic opportunity for our American Magic team to go sailing in a competitive environment; and get back into the match racing game. It’s great for the soul to do this kind of racing, and race against these guys here.” 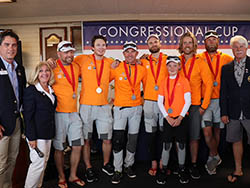 Both Barker, and tactician Terry Hutchinson, are past Congressional Cup winners, (Barker, 2005 and 2009; Hutchinson, 1992) and America’s Cup veterans, kingpins in NYYC’s American Magic campaign to challenge for the AC in 2021. Other crew members are James Baxter, James Dagg, Sean Clarkson, Greg Gendell, and James Lyne, with Jennifer Tille on logistics.

THE CONGRESSIONAL CUP
Congressional Cup racing runs Wednesday April 16 through Sunday April 22, beginning at roughly 11:30AM in the waters off the Belmont Veterans Memorial Pier, where spectators can enjoy commentary and camaraderie as they watch the competition. It is hosted by Long Beach Yacht Club, one of the nation’s premiere boating institutions since its founding in 1929. It is located at 6201 E. Appian Way in Long Beach, Calif.