Wind and "Wow" on Day One of Congressional Cup 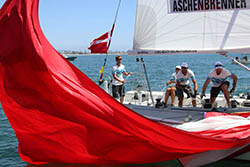 LONG BEACH, CALIF 18 APRIL 2018 - -Dean Barker (USA) celebrated his 45th birthday with six straight wins on Day One of the 54th annual Congressional Cup regatta, hosted by Long Beach Yacht Club (LBYC). Stiff competition, and solid breeze that started at eight knots and built to an exciting 14 knots, greeted the 10 top match racing teams from around the globe who convened in Long Beach for this prestigious World Sailing Grade One regatta. Congressional Cup racing continues through Sunday April 22, on the waters off the Belmont Veterans Memorial Pier.

Barker's team American Magic had battled its way into the Congressional Cup, qualifying at last week's Ficker Cup regatta with just one loss under the belt. It was the first stop on the New York Yacht Club American Magic challenge for the 36th America's Cup; and an auspicious one for Barker, CEO/tactician Terry Hutchinson and the campaign.

In a three-way tie for second place, after six flights of round robin racing, are Johnie Berntsson (SWE) 2009 Congressional Cup champion; three-time victor, in 2014, 2015 and 2016, Taylor Canfield (USA); and and Sam Gilmour (AUS). Gilmour set sail this morning with a secret weapon: 11-year-old Jack Snow.

LBYC members house the visiting Congressional Cup crew and officials, and for six years Julie and Bob Snow have welcomed various team members into their home. "The guys are near and dear to our hearts, and have become like family to us," explained Julie Snow. So when Sam Gilmour's Congressional Cup team weighed in significantly lighter than the maximum weight limit – a huge disadvantage in the breeze – they thought of the Snows' son: Jack.

"We've all seen Jack growing up over the years," surmised Gilmour, "and he gets bigger all the time ..."

"I received a random text from Keith Swinton (tactician) saying 'Hi Julie, how much does Jack weigh?' I thought that was funny ... but I had just weighed him, and texted back," said Julie Snow.

Jack tipped the scales at 40.2 kilos.

"And as it turned out, we were 41 kilos below weight," Gilmour said.

"I got home from school and my mom said, 'I've got to show you something,'" said Jack. Swinton had videotaped an invitation. 'Would Jack join Gilmour's Neptune Racing Team for the 2018 Congressional Cup?'

"At first I thought it was a prank! Then I realized it wasn't," admitted Jack. 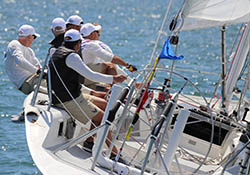 "I thought he was going to pass out!" his mother laughed. "He hasn't missed any school this year, and he's gotten great grades, so Bob and I said 'okay.' Keith is like a big brother to our son Jack, and I know he and the guys will take care of him; they're all so fantastic." Jack started his sailing 'career' at age 4, with the LBYC Sea Otters, advancing to Sabots and FJs. He's a floater on board, filling in when they need an extra pair of hands. "He's great," said Gilmour. "He has local knowledge, and comes up with some great one-liners too."

And it seems Jack is a bit of a lucky charm as well.

For the past three years, he has competed in a fleet race, held on the final day of Congressional Cup, for teams that don't qualify in the semi finals. He's been on the winning team in both 2015 and 2017!

Coincidentally, the youngest sailor 'til now has been Steve Flam, who raced in Congressional Cup 1976 at the age of 14; crewing for his father Barney Flam, while his mother did foredeck. Flam is still racing in Congressional Cup, with Dickson Racing Team. This year marks his 30th.

"This has been a dream of mine, and in the works, for years," said Chairman Eric Dickinson. "Now, it's a dream come true." Yacht racing aficionados can watch the races on Facebook and YouTube; find the link at www.thecongressionalcup.com. Live commentary is highlighted with feature segments by Australian Producer/Actress Camilla Jackson.

For those fortunate enough to live in Southern California, the Belmont Veterans Memorial Pier provides spectacular viewing of the thrilling races. "One of the most exciting things is literally looking right down on these guys as they sail by. You can almost reach out and touch the sails, they're so close," said Dickinson. Live commentary keeps you up to speed with the races, in a festive atmosphere.

THE CONGRESSIONAL CUP is one of the most prestigious top-level yachting events in the world. Established in 1965, it is recognized as the "grandfather" of match racing, pioneering the concept of on-the-water umpiring 30 years ago. Each year, this World Sailing Grade One competition features an elite delegation of the world's best sailors competing in five days of rousing matches, in the waters off Long Beach, Calif.

Racing begins at approximately 11:30AM daily, at Congressional Cup Stadium off the Belmont Memorial Veterans Pier. Double round robin, semi-finals, petit final, and final races will run through Sunday April 22, when the winner hoists the silver Congressional Cup and dons the prestigious Crimson Blazer! 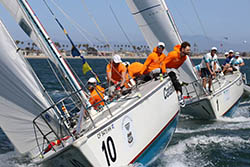 HOW TO FOLLOW
To get a full dose of race atmosphere with stadium viewing, watch live from Belmont Veterans Memorial Pier, at 15 39th Place, in Long Beach, Calif.

IN MEMORIAM
Today's Congressional Cup started with an on-the-water tribute to LBYC member Robert Graham, a local businessman, boater and community leader who died March 31, 2018 at the age of 82.

Graham was born in 1935 in San Marino and grew up on Balboa Island, where his first boat was a Balboa Dinghy – very much like a Naples Sabot. He won the International-14 championship in 1949 and was an extraordinary dinghy and big boat sailor. He counted such notable Southern California sailors as Bill Ficker and Bill Lapworth among his boyhood friends.

Graham chaired Congressional Cup in 1971, and was Commodore of LBYC in 1978.

He was recognized as providing sage advice to the club's governance until his passing.