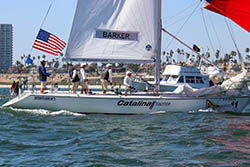 LONG BEACH, CALIF 20 APRIL 2018 - - With only two flights left in the 54th Congressional Cup regatta's Round Robin series – to determine which skippers will advance to the semi-finals – the hard-hitting competition escalated. Dean Barker (USA) and American Magic remained on top, with Taylor Canfield (USA), Johnie Berntsson (SWE), Sam Gilmour (AUS) and Ian Williams (GBR) all within striking distance of qualification.

But that's the only thing that settled down.

The action was electric, on the third of five days of racing at this prestigious World Sailing Grade One competition; as the door began to close for those at the bottom of the field.

Barker was undefeated in today's races, which were held in solid breeze that ranged from 12 to 16 knots in San Pedro Bay: while American Magic supporters watched the live stream at New York Yacht Club.

Canfield advanced to second place with 11-5, after a re-sail of a match with Aschenbrenner that was annulled due to a procedural error. Along with Berntsson and Gilmour, at 10-6 each, and Williams, 9-7; he will be scrapping for one of the four berths in the semi-finals, that will start tomorrow Saturday April 21. Racing continues through Sunday, for the Congressional Cup trophy.

Competing here for the third time, Gilmour is poised in the midst of current rivals/past Congressional Cup champions Berntsson (2009), Williams (2011, 2012, 2017), Canfield (2014, 2015, 2016) and Barker (2000, 2005). "We're in pretty good company," said the 25-year-old from Perth, Aus. "Tomorrow is going to be moving day. There are just a couple of races left, we've just got to finish up strong." Qualifying for the semis, with the prospect of winning the Crimson blazer; Gilmour would be following in the footsteps of his father Peter Gilmour, who won the Congressional Cup in 1988.

Williams, who is one point out of the top four, admitted, "The breeze was up today, it was very challenging." He was lauded by Berntsson for "keeping the boat upright."

Berntsson admitted, "The wind was strong, really puffy, and I was pushing it a little bit too hard. We had a broach, and had to take the spinnaker down before it could go up again." Williams took that match.

The sailors weren't the only ones to find the racing exhilarating. As momentum for the semis and finals builds, the crowd of spectators grew on Belmont Veterans Memorial Pier; where onlookers have a front-row view to the action.

"Just see my smile," said Alfredo Ricci, a leading International Umpire from Italy, who has experienced the top yacht racing action in the world. "It is an amazing regatta. It's a great opportunity for young guys to face top sailors … a mix between young and experts. And it's amazing having Dean Barker with American Magic," added Ricci. "You just have to come and see live the Congressional Cup!" 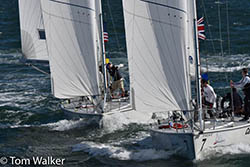 Another LBYC tradition is the Junior Congressional Cup: pairing the club's young sailors with the skippers in a dinghy regatta in Alamitos Bay. In a light breeze, just off the LBYC clubhouse today, ten FJs set off on a lively buoy race, as the shadows grew long on the bay.

Preston Woodworth, 13, racing with Gilmour, had a clean start and never relinquished the lead, to win the Crimson tee-shirt, and trophy. Woodworth explained his race strategy, saying, "Sam was kind of like my tactician, but we both had our own ideas, so we mixed them up a little." Woodworth was one of eight youngsters who had interviewed and introduced the Congressional Cup competitors at the annual Meet the Skippers dinner.

"It feels good to win," said the young helmsman, who has sailed mostly Sabots but recently began racing FJs. He said his sailing career will "definitely continue," and supporters should look for him in the Congressional Cup in the future.

Somewhat lighter breeze is forecast for tomorrow's Congressional Cup racing: a stroke of luck for competitors, who have been battling hefty breeze and chop the past three days in. Racing will commence around 11:30am off Belmont Veterans Memorial Pier, with the final two flights of the Round Robins; advancing to semi-finals, petit final, and finals through the weekend.

Starting Saturday, each of the 10 race boats will have a 360-degree Samsung Virtual Reality camera, for displays and live-streaming on Facebook @CongressionalCup and YouTube. Visit www.thecongressionalcup.com for full information.

THE CONGRESSIONAL CUP is one of the most prestigious top-level yachting events in the world. Established by LBYC in 1965, it is recognized as the "grandfather" of match racing, pioneering the concept of on-the-water umpiring 30 years ago. Each year, this World Sailing Grade One competition features an elite delegation of the world's best sailors competing in five days of rousing matches, in the waters off Long Beach, Calif.