Ficker Finalists Berntsson and Barker Advance to Congressional Cup Semi-Finals, along with Canfield and Gilmour

Racing continues off Belmont Pier tomorrow for the Crimson Blazer

Stage One of the 54th Congressional Cup regatta wrapped up with the final two races of Round Robins, advancing Dean Barker (USA), Taylor Canfield (USA), Johnie Berntsson (SWE) and Sam Gilmour (AUS) to the semi-finals.

Racing concludes tomorrow Sunday April 22, in this World Sailing Grade One Match Race event, hosted by Long Beach Yacht Club. Both Barker and Berntsson had qualified for Congressional Cup through the Ficker Cup regatta last weekend. A Grade Two regatta, the Ficker Cup is prestigious in its own right, but also a stepping stone to the Congressional Cup; with the top two advancing to this week's competition. It was founded in 1980 to honor Bill Ficker, a legendary yachtsman who helmed Intrepid to victory in the 1970 America's Cup, spawning the slogan 'Ficker is Quicker.'

"We haven't match raced for a long, long time," admitted Barker, whose American Magic team represents the New York Yacht Club's challenge for the 36th America's Cup. Ficker Cup, he said, "was without question a great opportunity for our team to practice, spend time together and dust out a bit of the rust."

That training has paid off, as Barker dominated the Congressional Cup; today relinquishing today only his second loss of the series, to fellow Ficker Cup player Berntsson.

STAGE ONE, AND DONE

The final two flights of the Round Robin series were raced under hazy skies and a blustery breeze that waned as the day wore on. Coming into Saturday after a successful Day Three, Ian Williams (GBR) stood just one point out of contention for semi-finals, with two decisive races to go.

But Williams was still in the hunt. If he could win both races, and Gilmour or Berntsson lost theirs, the semis were in his sights. In Flight 16, on the first downwind leg, Price and Williams were bow to bow; but Williams outwitted Price at the gate to take the lead. Splitting the course on the second downwind run, Price covered and began to reel Williams in. But Williams, leeward, pressed him past the layline; hoisting a jib for the final stretch of the 'downwind' leg, to capture that win.

In his final match of the day, however, Williams succumbed to Canfield after sailing into slightly lighter air; propelling Canfield into second place, with 13-5.

Meanwhile Barker and Berntsson had a "dramatic" match, with Barker's start less aggressive than normal – perhaps as he already had his spot in the semis sewn up. But as the match progressed, the tacking duels began, and the racing heated up. By the final downwind leg, Barker forced Berntsson to the pin end of the line; a deliberate infringement on Barker earned Berntsson a red flag penalty. Still continuing to battle, both pros spun upwind with their spinnakers aloft, creating a tangle of wayward kites. Barker's team, penalized for not keeping clear, watched as Berntsson dumped their chute and slipped across the line. "The drama was at the 120-percent level," Berntsson said, "complete mayhem."

Despite that loss, Barker completed the series with an impressive 16-2 record. "It was a tough double Round Robin, with a lot of very close races, but we came out on the right side of a lot of them," said Barker. "We learned some very good lessons. Going into the semis, I'm very confident we can keep stringing good races together."

Canfield finished 13-5; while Berntsson and Gilmour edged out Williams, each 12-6. 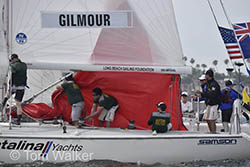 A haze of warm tropical air settled over San Pedro Bay as the semi-finals commenced. Canfield bested Berntsson in their first match, while Barker clashed with Gilmour. In a fierce bout, which celebrity commentator Tucker Thompson called a 'trans-Tasman battle,' Barker attacked Gilmour, who was struggling with an hourglassed spinnaker in the pre-start. "It's like a cat toying with his prey," Thompson winced, as Barker continued dizzying attacks on Gilmour, winning the start. Although Gilmour was able to shake it off and recover, Barker continued to extend his lead and finished nearly a minute ahead of his young rival. Racing will continue tomorrow, with the first to three points advancing to the finals of the Congressional Cup. Petit-final races will also be held to determine third and fourth place, while the balance of the teams compete in a fleet race around the Bay.

THE CONGRESSIONAL CUP is one of the most prestigious top-level yachting events in the world. Established by LBYC in 1965, it is recognized as the 'grandfather' of match racing, pioneering the concept of on-the-water umpiring 30 years ago. Each year, this competition for the prestigious Congressional Cup trophy and Crimson Blazer features an elite delegation of the world's best sailors competing in five days of rousing matches, in the waters off Long Beach, Calif.