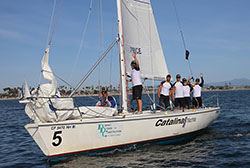 Eight teams from around the globe competed in the 40th Ficker Cup match race: three days of what Principal Race Officer John Busch called, “Awesome, epic sailing.” Although the wind was slow to come up in the morning, when it did fill in, it was idyllic, with cool ocean breezes and plenty of sunshine.

Going into Sunday’s semi-finals, Seawanhaka Corinthian Yacht Club’s Poole, who had aced Stage 1, was paired with Hood, a LBYC Staff Commodore. In the first match, Hood got ‘hoodwinked’ - surrendering a solid lead when he targeted the wrong windward mark. Poole took advantage of the error and won that race, and continued to dominate the series; moving on to the finals.

A crowd had gathered on Belmont Pier to watch the races, and Aschenbrenner and Price kept them in suspense. Each won one race, then another, until at 2:2 they entered a final match-point battle in race five. Off the start, Aschenbrenner tacked too close to Price, earning a penalty. The die was cast. Despite a duel that took them to the outer reaches of the course, Aschenbrenner couldn’t rebound. Price won by a boat length, to enter the Finals.

Earlier, the breeze had clocked and built to 9 knots. But with the clock ticking and wind waning, PRO Busch decided to reduce the Finals to a single winner-take-all match.

Despite a penalty in the pre-start, Hood recovered and bested Aschenbrenner, for third place: an impressive accomplishment for the 61-year-old Staff Commodore, and only amateur skipper in the field of finalists.

Poole and Price’s match saw spinnakers up and down in the pre-start and tight racing around the course, until Poole, on the hunt, bumped Price’s stern. Officials threw up two flags on Poole, who was unduly advantaged by the foul; Price secured that win, and the Ficker Cup title.

“It didn’t really go according to plan, but we made it in the long run,” Price revealed. “In hindsight, it was the best preparation we could have, leading into next week. We had five great matches against Joachim (Aschenbrenner) and it was close every race. It was intense … and I wish it wasn’t. But that’s where you learn. It really set us up for next week.”

Finishing in second place, Poole was “very excited” to have earned an invitation to Congressional Cup. “My plan is to keep improving on what we did this week; stay calm, cool, collected, and trust my crew to point me in the right direction,” he said.

“After getting into the semi-finals last year, we felt this year we should be there again,” added Poole, who finished third in last year’s Ficker Cup. “That was our goal and expectation, coming into this event. So it’s coming together really nicely; we’re feeling ready now.”

Although a ticket to the Congressional Cup is coveted, so too is winning the esteemed Ficker Cup trophy.

The Ficker Cup was established to honor Bill Ficker, a world class Star champion and winning helmsman of the 1970 America’s Cup. Among the who’s-who of names inscribed on the silver trophy are Taylor Canfield, Dean Barker, Sally Barkow, Terry Hutchinson, John Kostecki, Simone Ferrarese and Johnie Berntsson … many who have gone on to win the Congressional Cup.

Requests for invitations to Ficker Cup 2020 are already coming in, according to Chair Cheri Busch. “The competitors love it. Ficker Cup is a top-notch regatta, and everyone loves being out here to see who is going to fill those last two berths and compete the Congressional Cup lineup.”

She noted Ficker Cup is an invitation-only regatta, with strict criteria. “We have to have at least three international teams, and there’s a point basis for the skippers. We evaluate their skillsets, abilities, and ISAF ranking.”

As Chair, she oversees nearly every aspect of the event. “Thank God I’ve got a fantastic group of volunteers,” Busch declare.

She’s also got a fantastic counterpart in husband/PRO John Busch. “John and I work really well together as a team. He’s a certified PRO; experienced, knowledgeable and competent. His skills complement everything that’s going on, onshore.”

These days, she added with a laugh, “Ficker Cup is our pillow talk!”

“This has been a great regatta, and it’s very special we can do this together.”

The Congressional Cup, hosted by Long Beach Yacht Club, will be held April 3 to 7, 2019.

Spectators are invited to enjoy this premier racing experience April 3 through 7 from 11:30AM to
5:00PM at Belmont Veterans Memorial Pier, 15 39th Place in Long Beach, CA, where fans will find convenient parking and full facilities.

Wednesday April 3 and 4, LBYC will offer live-streaming coverage on the Congressional Cup Facebook Page and in the Club lounge for club members.

Friday April 5 through Sunday April 7, LBYC will offer live-streaming coverage and features to viewers around the globe on the Congressional Cup Facebook page, the event website: www.thecongressionalcup.com, and in the Club lounge for members.