At the end of Day Two, with the first Round Robins complete and solid headway into round two, Berntsson was 11-1, with Taylor Canfield (USA) putting on the squeeze at 9-2. Ian Williams (GBR) and Scott Dickson (USA) each trailed by one point.

The Congressional Cup is recognized as the grandfather of modern world-class match racing. Founded by LBYC in 1965, it set the standard for top-level match racing worldwide, pioneering the concept of on-the-water umpiring in a spectator-friendly venue. Racing for the 55th Congressional Cup trophy, and the esteemed Crimson Blazer, continues through Sunday. Berntsson, 46, isn't a professional fulltime sailor, like many of his rivals. Competing on the match racing circuit since 2006 just a half-dozen weeks a year, he said, "We know if we do our best, we can beat them - but it's hard to be at that level all the time." In that time he's done "about 14 Congressional Cups" - admitting he's lost count over the years. He qualified for last year's Congressional Cup through the Ficker Cup, going on to semi-finals, where he finished fourth, and in 2017, he was runner up to Williams. But he hasn't donned the Crimson Blazer since 2009.

Sitting at the top of the leaderboard for the second day in a row, Berntsson said, "The crew is doing a really extraordinary job, the atmosphere on board is terrific, and everything is moving in the right direction." But he rejected notions the team has peaked. "We're not doing everything completely right, but we are doing the important stuff right. So I think there is still room for improvement."

Berntsson's one loss today was to Williams, who has a history - as does Canfield - of ramping up throughout the event. Both ended Day One mid-fleet, but turned on the heat today, wrapping up at 9-3 for Canfield; with Williams and Scott Dickson (USA) tied at 8-4. Dickson, a long-time member of LBYC, has competed in 20 Congressional Cups, and is the winningest skipper in Ficker Cup history. He said his team is made up of "purely locals, from the local sailing scene."

"I'm very proud of them all, operating at a new level that they're very comfortable at, against a full field of world-class sailors. We've matured as a team, and we're firing on all cylinders. It's really rewarding."

Stage One Round Robins will conclude tomorrow: "moving day" as the racers call it.

Which four teams will advance to the semi-finals? Who, of the six teams eliminated, will look for victory in the fleet race? Or victory in the Junior Congressional Cup races? Follow the action through Sunday, April 7, on-site at Long Beach Belmont Veterans Memorial Pier, where spectators can enjoy the the races and commentary, free, from 11:30AM to 5PM daily. Or watch the live-streaming coverage and features plus nightly press conferences on Facebook @CongressionalCup and the event website: www.thecongressionalcup.com 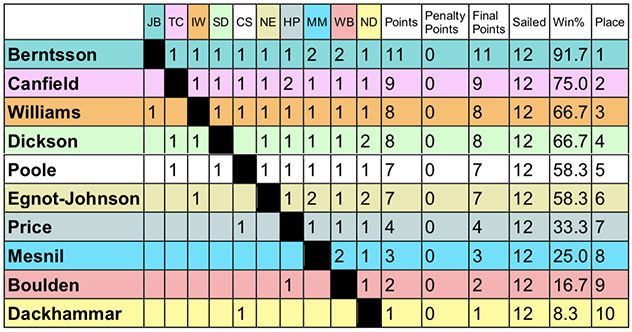 LONG BEACH YACHT CLUB
Established in 1929, Long Beach Yacht Club is recognized as a leading club in the international yachting community for its commitment to excellence in yacht racing and innovation in race management. Congressional Cup, the club's signature event, now in its 55th year, is the preeminent match racing regatta in the United States and considered the Gateway to the America's Cup. In December 2018, the Royal New Zealand Yacht Squadron accepted Long Beach Yacht Club's challenge for the 36th America's Cup, to be sailed in Auckland, New Zealand in 2021, where the Club will be represented by Stars + Stripes Team USA. In addition to hosting numerous local, national and international yachting events, the Club's member families enjoy a year-round calendar of social, yachting, and junior activities at its beautiful clubhouse on the shore of Alamitos Bay.