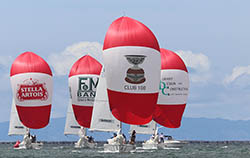 This Grade 2 Match Racing competition, organized annually by Long Beach Yacht Club since 1980, is both a qualifier to the prestigious Congressional Cup regatta as well as a world-class sailing event in its own right.

The 2019 Ficker Cup will take place March 29 to 31 in the Congressional Cup stadium, a designated race course adjacent the Belmont Veterans Memorial Pier, beginning at 11:30AM daily. Eight top-notch skippers from around the globe, each with a complement of five crew, have been invited to compete in the event, which consists of a double round robin followed by semi-finals, petit finals and finals. At the end of three days, the winner will be awarded the Ficker Cup trophy: so named to honor Bill Ficker, a legendary yachtsman who helmed Intrepid to victory in the 1970 America’s Cup and won the Congressional Cup in 1974.

On its heels: the 55th Congressional Cup, one of the leading match race events in the sport of sailing!

Enthusiasts are invited to enjoy the action free-of-charge from Belmont Veterans Memorial Pier, at 15 39th Place, in Long Beach, Calif. Or, follow Ficker Cup online at www.lbyc.org and on Facebook @CongressionalCup.

Follow Congressional Cup at www.thecongressionalcup.com and on Facebook @CongressionalCup, where all races will be live-streamed April 5 through 7. Coverage will include skipper interviews, results and daily highlights, press conferences and special events. 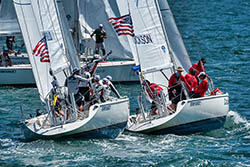