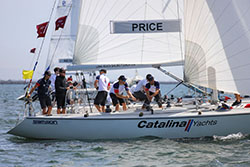 Classic Long Beach conditions transpired for the first round robin of the three-day match race series, with southwesterly breezes of 11 knots shifting right and building to 16 knots throughout the afternoon. Unlike the traditional weather system though, the competition was anything but status quo.

Racers were aggressive right out of the gate. Chris Nesbitt, USA, extracted his first of two black flag penalties in the first flight – handing Aschenbrenner the first of four wins today. Aschenbrenner, who just returned from an offshore race to Cabo San Lucas, has been focused on one-design fleet racing the past year, and admitted, “In the practice yesterday, I definitely realized I’ve got to get my brain back into the match racing, and into making the quick decisions.”

“But match racing is where I started all of my sailing, so I’m excited to be back.”

Nesbitt shook off his “slow start,” adding, “It was unfortunate. Both incidents were definitely my fault. We were just a little over-eager and hope to do better tomorrow.” He finished the day on a high note, beating Pearson Potts, USA, in the final race of the day.

But it was Price who came out guns blazing. Primed from a win in last weekend’s LBYC Butler Cup – held in the same Catalina 37 keelboats as Ficker Cup – he fearlessly whipped his vessel, and his competitors. His father David ‘Pricey’ Price watched from the Belmont Veterans Memorial Pier, chuckling. “You’ve just got to laugh,” the 23-year-old’s father conceded; mindful of the damage deposit. 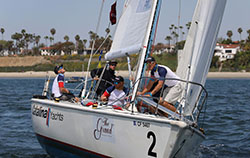 Despite being the number three-ranked match race skipper in the world, Price acknowledged he’s been “struggling” in the Congressional Cup. “I’ve had a couple of average results the past two years. We’re hoping to get into it and do well this year.”

Racing continues Saturday and Sunday March 30 and 31at the Congressional Cup stadium, a designated race course adjacent the Belmont Veterans Memorial Pier. Spectators are invited to watch the action, for free, beginning at 11:30AM daily.

Conditions Saturday are predicted to be light; Sunday promises to be hot, hot, hot as the weather and action heat up, in the final struggle for Ficker Cup. 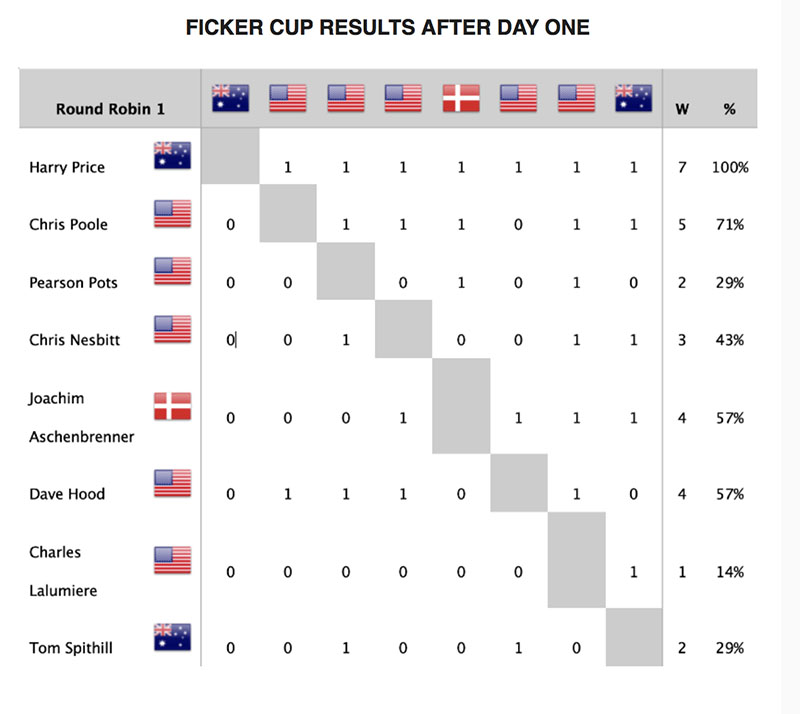