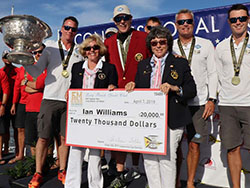 A quadruple winner of the Crimson Blazer (2011, 2012, 2017 and 2019) Williams is tied with Gavin Brady, Taylor Canfield, Rod Davis and Peter Holmberg with four wins each. If Williams can pull off victory in 2020, it will make him the winningest skipper in the 56-year history of this prestigious event.

But competition is expected to be fierce as he squares off against nine of the leading match racing skippers in the world, including past Congressional Cup winner Johnie Berntsson (SWE) and last year’s runner-up, Scott Dickson (USA). 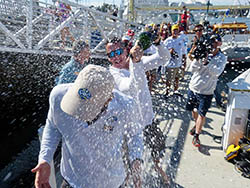 Making his Congressional Cup debut is Jordan Stevenson (NZL), who earned his spot in the lineup as victor of the USA Grand Slam series; accruing the most points in that four-part circuit made up of the Chicago Match Cup, Detroit Cup, the Oakcliff International, and Thompson Cup. Two final berths will be filled by the top two finishers in the Ficker Cup regatta April 24 to 26.

The Congressional Cup will be the kick-off event for the 2020 World Match Racing Tour but is best known as the ‘grandfather’ of match racing. Founded in 1965 by Long Beach Yacht Club (LBYC), Congressional Cup organizers revolutionized the game of match racing with on-the-water umpiring, maintaining a fleet of identical 37-foot Catalina sloops to guarantee an even platform and exciting competition – and a thrill for spectators on the Belmont Veterans Memorial Pier. Racing is held directly off the pier at 15 39th Place, Long Beach, Calif. where spectators can view this world class competition for free, beginning around 11AM each day.

“We are looking forward to another great Congressional Cup with top-notch competitors and race action,” announced Chair Cheri Busch, “and are happy to welcome the World Match Racing Tour as part of Congressional Cup again.” Busch has been involved as a volunteer in the Congressional Cup organization for nearly a decade and is part of a dynamic duo leading the event this year; with husband John Busch serving as the Principal Race Officer (PRO). “It’s exciting to be involved in such a prestigious, world-renowned regatta, and something the members of Long Beach Yacht Club, look forward to each year.” 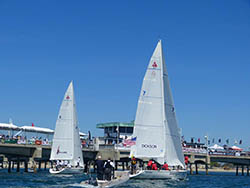 Racing will commence Wednesday April 29 and run through Sunday May 3: format will include a Double Round Robin followed by semi-finals, petite finals, and the finals on Sunday. In between, racers will be fêted and fed at LBYC. A unique aspect of Congressional Cup is that it is hosted by LBYC members, 300-strong, who volunteer in every aspect of race management, organization and hospitality. It is like no other premier yachting event in the world, and a favorite of competitors.

* Rankings published Jan. 8, 2020 by World Sailing, the world governing body for the sport of sailing.